With improving performance and an expanding range of options for investing, now may well be the best time for some while to be an investor at Lloyd’s. 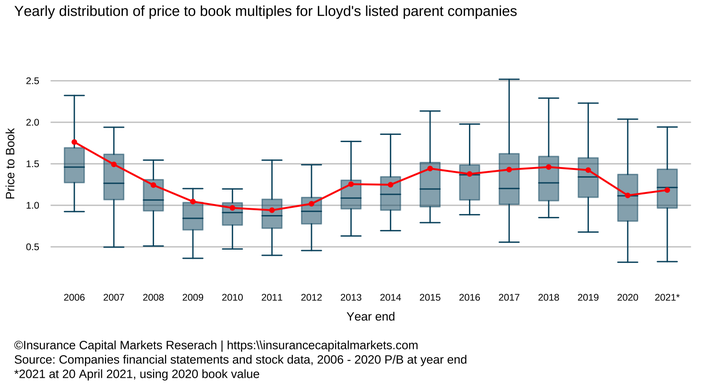 The LMA and the panel agreed to make the recording of the panel discussion available. You find the video at the end of this article.

Paul Davenport, who chaired the discussion, provided the background and introduced the panel.

Historically, Lloyd’s business model was purely on an agency basis. Names would participate in syndicates, but they had no ownership of the business as such. This business model changed with the evolution of integrated Lloyd’s vehicles (ILV), resulting in many ILVs having listings on the London Stock Exchange (Amlin, Atrium, Advent, Beazley, Catlin, Hardy, Hiscox, Kiln, Novae, Omega, etc). This offered investors the opportunity to participate in both the technical result, i.e. via dividends, and the value creation, i.e. increasing book value multiple.

Over time, most of these ILVs have been bought by bigger, global (re)insurers such that today 80%+ of Lloyd’s capital now comes from these global companies. Yet even here, a significant number of these entities with Lloyd’s businesses have now started to build out agency businesses of their own, managing third party capital again. This has been done either via dedicated ILS vehicles or SPAs at Lloyd’s or hedge fund reinsurers.

The new Lloyd’s PCC structure, via London Bridge Risk PCC Ltd, offers further opportunity for new 3rd party capital to invest directly in a quota share reinsurance of a Lloyd’s member, broadening the access for investor capital into Lloyd’s insurance risk. With that being said, the panel offered their perspective.

Burkhard Keese highlighted the motivation of the new PCC structures via London Bridge Risk PCC Ltd. In the past participation for institutional investors in Lloyd’s has not been without difficulties. The new PCC structures allow those investors to access risks from Lloyd’s members in a straightforward and tax efficient manner in the UK. Thanks to the pre-approved documentation the process is streamlined and provides a tax efficient investment into Lloyd’s.

Another attractive feature of this structure for potential investors is that they can access risk beyond pure catastrophe risk. They gain all the benefits from the whole Lloyd’s platform, such as its ratings, world-wide licences, capital efficiency, and robust performance oversight.

Burkhard emphasized that Lloyd’s had seen significant improvement in underlying performance, despite the COVID pandemic. However, it will continue to be uncompromising with the quality of the underwriting in its marketplace i.e. incoming capital should not dilute performance and must comply with Lloyd’s capital management processes.

Capital Markets - The challenge of liquidity

At Peel Hunt, an investment bank which provides brokerage and financial advisory services to business, Andreas Van Embden works with pension funds, institutional investors and wealth managers, looking for opportunities to gain exposure to insurance risk as an asset class. Lloyd’s is seen as an attractive diversifying proposition with an efficient capital structure. However, embedded attritional risk needs to be clearly managed and volatility of Cat risk mitigated.

A challenge for investors is often the illiquid nature of investments in Lloyd’s. In the past investors could build a portfolio based on listed ILVs, but today only Beazley and Hiscox are left as predominantly Lloyd’s listed insurers. To offer a more liquid investment into Lloyd’s, one option might be to attract ‘permanent capital’ in the form of a closed fund, which is then listed on a stock exchange. This fund could then offer its capital to managing agencies and new syndicates. The timing for such a proposition is seen as ideal, but it remains to be seen whether managing agencies have demand for such forms of capital.

Private equity ownership can be a good fit for a Lloyd’s business, he argued, to support management teams to achieve their ambitions to grow and develop their franchises over a multi-year horizon with a supportive shareholder and aligned incentives.

Martin offered CVC’s past involvement in BRIT as a case study. Over the five year period of private equity ownership the company’s performance improved driven by a focus on underwriting profitability, redeployment of the investment portfolio and management of operating cost efficiency. In addition the investment benefitted from a favourable trend in the insurance pricing cycle which supported the IPO and subsequent sale.

More recently CVC announced their acquisition of RiverStone Europe (subject to change of control approvals), as they believe the legacy P&C market provides attractive growth opportunities, particularly at Lloyd’s thanks to its efficient Reinsurance to Close (RITC) process, and that RiverStone is one of the highest quality franchises in the sector with a leading track record and reputation.

Transparency - Key to valuation and liquidity

How can one measure value creation of Lloyd’s? That was the question Quentin Moore of ICMR wanted to answer, as it is a question many investors struggle with at Lloyd’s given its opaque nature and illiquidity. Quentin’s starting point was to note that today over 80% of capital at Lloyd’s is provided by listed companies. Research at ICMR has shown that the information available from those listed companies can provide a proxy for valuing Lloyd’s businesses and Lloyd’s itself.

Quentin showed the distribution of trailing price to book multiples of the listed Lloyd’s parent companies at each year end and overlaid this with a premium weighted average as a proxy for Lloyd’s on a pro-forma basis (red line in the chart below). The weighting takes into account the written premium of these publicly listed companies underwritten both at Lloyd’s and globally, such that entities with a higher proportion of their income derived from Lloyd’s get more weight. The plot of P/b multiples over time not only shows the change in capital markets valuation of global (re)insurance specialty companies but also gives insight into the insurance cycle.

Quentin estimated Lloyd’s current pro-forma P/b at c.1.2x book value. Based on Lloyd’s pro-forma financial statements, this translates to the Lloyd’s market having in aggregate created around £7bn of value as at now, equating to a total market value of around £40bn. He showed ICMR’s estimated breakdown of value created by syndicates, pointing out that the biggest syndicate does not necessarily have the highest P/b multiple.

With the same premium weighting approach as used to proxy Lloyd’s P/b valuation, one can also aggregate the daily share price of the listed parent companies of Lloyd’s managing agencies to provide insight into the daily build-up of the value creation at Lloyd’s.

ICMR believes that applying these ideas can improve the transparency of Lloyd’s, which can only be beneficial in the long run and may lead to a broader range of investment opportunities at Lloyd’s in the future.

A poll of the attendees during the discussion revealed that 85% believe that third party capital is not only here to stay at Lloyd’s but is expected to increase as a proportion of total capital. The form that this takes, however, will inevitably evolve given the shrinking number of traditional Names. A poll after the event on LinkedIn revealed that c.60% would like to personally invest in the overall Lloyd’s market result, if given the opportunity in a suitable investment.

To conclude the discussion, Paul Davenport asked the panel to answer the following question: “It’s 2030 and Lloyd’s has had a very successful decade. What’s happened?” Burkhard’s perspective was that, for Lloyd’s to succeed over the long term, it will need to demonstrate improvement every year, meaning targeting profitable growth rather than simply managing existing business.

Andreas saw solving the liquidity conundrum and the availability of independent research and transparent data as a necessary development for a wider capital markets involvement at Lloyd’s. At the same time, Lloyd’s needs to maintain its focus on specialty risk underwriting and not drift too much into commodity risk, as that would decrease its attractiveness.

For Lloyd’s to achieve a decade of success, Martin believed it needed to maintain its position as the go-to hub for specialty risk and to continue its journey towards digitalisation.

Quentin thought that, because Lloyd’s would always be a relatively expensive place to do business, it needs to embrace what has made it such a success for so long: having the ability to work with distressed markets where both risk and reward are high.

All on the panel agreed that investor appetite for Lloyd’s as an asset class has increased, not reduced. With improving performance and an expanding range of options for investing, now may well be the best time for some while to be an investor at Lloyd’s.

Recording of the discussion